Friends of the Earth International’s pre-conference of a Peoples Gathering on Forests, Biodiversity, Community Rights and Indigenous Peoples, October 14-17, 2010

While the conference was underway we all received the sad news that one of our colleagues and friend, Nomcebo (MaMbili) Mvelase, from groundwork-FoE South Africa had sadly passed away on Friday, the 8th of October after a fatal stabbing in the Pietermaritzburg city centre. The video above documents all the participants of the Ecological Equity Conference coming together to mourn her passing and pay tribute to this inspiring woman, mother and activist. The poem is written and spoken by Nnimmo Bassey, Chair of FoE International … read more

Faces from the Ecological Equity Conference 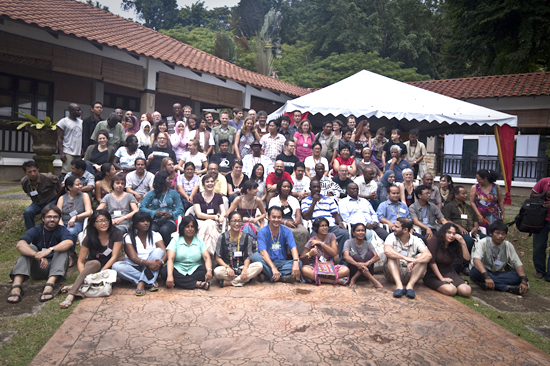 Over 100 community members and campaigners from around the world attended the Friends of the Earth International pre-conference. Photo: Conor Ashleigh, http://conorashleigh.com

FAILURE TO PROTECT BIODIVERSITY DENOUNCED
More than 100 representatives of environmental NGOs and local communities meeting in Penang, Malaysia denounced the role of governments and corporations in biodiversity loss, deforestation and the failure of governments to meet the targets set to halt biodiversity loss under the Convention on Biological Diversity (CBD). These representatives called for an immediate halt to the destructive projects being promoted by governments and corporations that enter communities under the guise of development but instead bring environmental destruction and serious human rights violations … read more

Thanks to Rick for this lovely video of everyone at the pre-conference getting a group photo. There will be a lot more posted on the website in the next two weeks. We are still in Malaysia and internet is slow … so watch this space!